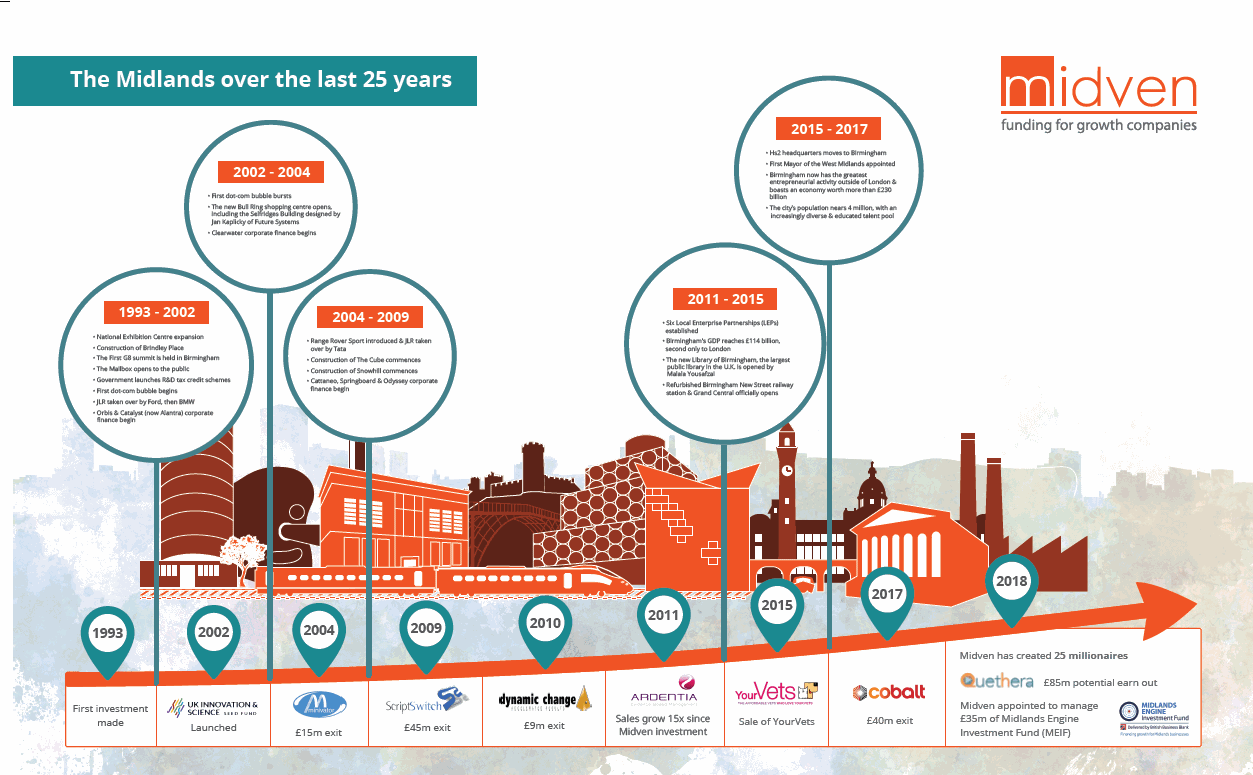 Since 1993, the Birmingham-based venture capital firm has played a leading role in fuelling the region’s growth and innovation.

Birmingham – 4 October 2018 — Leading venture capital firm Midven is celebrating a landmark 25 years of investment in the West Midlands. Midven has invested more than £60m into the region and raised £200m co-investment into their portfolio. Midven continues to invest in the Midland’s most ambitious entrepreneurs through its recent appointment to manage the £35 million equity portion of the Midlands Engine Investment Fund (MEIF), as well as the launch of the firm’s first Enterprise Investment Scheme (EIS) fund.

Since their first investment in 1993, Midven has witnessed and contributed to a host of exciting changes in the region, from massive developments in tech innovation to booming construction.

“Midven has always believed in this region’s great potential and we are proud to have continuously supported entrepreneurship within the West Midlands through our ‘more than money’ approach”, comments Tony Stott, Chief Executive at Midven.

“Over the last quarter century, Midven’s venture strategy has adapted along with the vast developments and changes across the Midlands. Across the spectrum — from new technologies that have had a radical impact on manufacturing, to the evolution of products and services people use, to the business models used by SMEs — Midven has kept its focus on investing in the right teams, picking technologies that will have a long-term future, and trying to avoid financial hurdles such as the first dot-com bubble in the early noughties”.

Key highlights over the past 25 years at Midven

Looking to the future

There has never been a better time to invest in the Midlands. Birmingham now has the greatest entrepreneurial activity outside of London and boasts an economy worth more than £230 billion.

“It is an exciting time for Greater Birmingham and the West Midlands. The region has reinvented itself as a global centre for innovative and fast-growing young companies, whilst attracting investment from city behemoths including HSBC”, comments Brian Blakemore, Chairman of Midven. “Furthermore, the pace of development across Birmingham’s skyline, alongside the wealth of large-scale infrastructure projects, including HS2, have created significant employment across the city and is building an ever-growing population of skilled professionals to support long-term, sustainable growth”.

On the heels of the appointment to manage the £35 million equity portion of the Midlands Engine Investment Fund, Midven’s 25th anniversary also coincides with the launch of Midven’s Greater Birmingham EIS Fund (GB EIS), which will allow private investors to benefit from the exceptional opportunities that exist in the Midlands. This innovative Enterprise Investment Scheme fund will back regional ventures that qualify for the Treasury’s highly-advantageous tax reliefs. The GB EIS Fund Investment Memorandum is available for download here