Alternative Finance and its role in SME growth

The UK is creating unicorns at a rate of 1 per month, but plenty of other high-quality opportunities are missed as investors chase these hugely valuable listings. Of the 600,000 start-ups founded each year, less than half of these survive longer than 3 years.

With a recent report stating that traditional methods of financing are insufficient and SMEs need to consider other methods, and with the alternative finance market growing rapidly over the last couple of years, we might well have reached the point that SMEs should start looking at Alternative Finance as the best option for growing their business.

As a venture capital business, we would say this wouldn’t we. So what do the facts say

The government is pushing Alternative Finance

In February of this year, in an attempt to fill the gap and in the face of what appeared to be the UK’s imminent exit from the EU, UK Finance launched the ‘Let’s Talk Business’ campaign. This initiative called for all businesses, both large and small, to prepare for the change (positive and negative) that they would have to face after the UK’s departure from the European Union. As part of the campaign, small and medium enterprises (SMEs) were encouraged to discuss and consider the sourcing of Alternative Finance.

The banks are increasingly risk averse

SME finance is a crucial area when it comes to the growth of small business throughout the UK. Whilst the ‘one in a million’ business may be able to grow organically without any outside funding, most will require some form of capital injection to either spark this growth or accelerate it. However, SMEs often encounter difficulties in sourcing finance through conventional routes, a problem that has only been exacerbated by the uncertainty surrounding Brexit. After all, high-street banks are becoming increasingly cautious over lending money to any business that they deem to be ‘high risk’. In fact, bank finance to SME’s is forecast to fall by 15% over the next five years.

As a result of these limitations, and following on from this year’s initiative, entrepreneurs are increasingly looking to Alternative Finance such as venture capital, crowd funding platforms and peer to peer lending in order to grow their business. Since 2017, the total value of the Alternative Finance market increased by 35% to £6.2 billion, suggesting that Alternative Finance options are certainly worth considering for many businesses.

What options are available?

There are a number of options that SMEs can research when it comes to sourcing Alternative Finance. The most suitable option is ultimately dependant on the business itself, with funding primarily falling under one of two categories – equity finance or debt finance.

Equity financing is the process of raising capital through the sale of shares. Companies will often pursue this option during the early stages of their growth, particularly when the company does not have sufficient revenues, cash flow or hard assets to act as collateral. Equity financing can attract capital from early stage investors as they are willing to take risks alongside the entrepreneur with the attraction of a greater return in the long-term.

Later stage companies can also attract equity finance. When a company is established and has assets and cash flow, or has the promise of high growth due to new technologies or new markets, it can raise substantial capital as additional investors seek to support the anticipated growth without the associated risks of early stage investing. A 50% explosion in equity finance is forecast to occur over the next five years.

Another option for SMEs to consider is debt finance from alternative providers such as peer to peer platforms. As interest rates have fallen, new lenders have entered the market.

Peer to peer platforms began as ways of matching companies with individuals that wished to lend to them. However, they are becoming much more common place within the financing community, now raising money from institutions (such as the government, or pension funds) and then lending it to companies.

Some peer to peer platforms specialise in financing particular assets (e:g sales invoices, one at a time), others specialise by taking risks (e:g the provision of unsecured lending) that banks are unable to do.

What options do Midven provide?

Venture capital is an excellent alternate route for raising finance and many small businesses are beginning to realise the benefit of the opportunities that it brings. 44% of business owners now say they would be willing to issue equity in return for financial support (up from a figure of just 12% in 2013). Midven provides equity finance to SMEs and currently has two venture capital funds which are actively seeking investment opportunities: the Greater Birmingham Enterprise Investment Scheme Fund (GB EIS Fund) and the Midlands Engine Investment Fund (MEIF).

The tax incentivised EIS scheme is a key route of finance for SMEs looking for investment. Since its inception in 1994, EIS has raised over £20 billion from individuals, and funded just shy of 30,000 companies.

With the majority of investment (62%) taking place in London and the South East, the GB EIS fund was established with the aim of utilising Midvens’ unique market position, in-depth regional knowledge and investing experience to exploit the untapped potential of the West Midlands region. As the city with the highest start-up to population ratio, there are increasing numbers of opportunities, and with an entry point of £20,000, the fund will give more individuals access to the option of supporting the fantastic range of small businesses that exist in the Midlands region.

MEIF WM is a widely publicised fund both regionally and nationally and aims to spread awareness of the equity finance available to SMEs in the West Midlands. Having currently invested over £6 million into 15 different portfolio companies, the fund is always looking for established businesses with ambitious plans and high growth potential.

The health and wealth of SMEs directly affects the state of the UK economy. SMEs make up around 98% of businesses in the UK private sector and contribute £1.9 trillion each year towards the economy of the UK. Furthermore, the sector accounts for the employment of around 16 million people in the UK. A system lacking in the appropriate level of Alternative Finance would see wide-ranging detrimental effects. Thankfully, whilst the disparity associated with high-street bank loans has increased, the amount of Alternative Finance available has continued to increase year-on-year, bridging the gap and ensuring the continued growth of the UK as an epicentre for start-ups.

To discuss how Midven could help you business grow, get in touch.

Learn more about our funds:

For years Birmingham was labelled as the manufacturing and engineering centre of England. It... 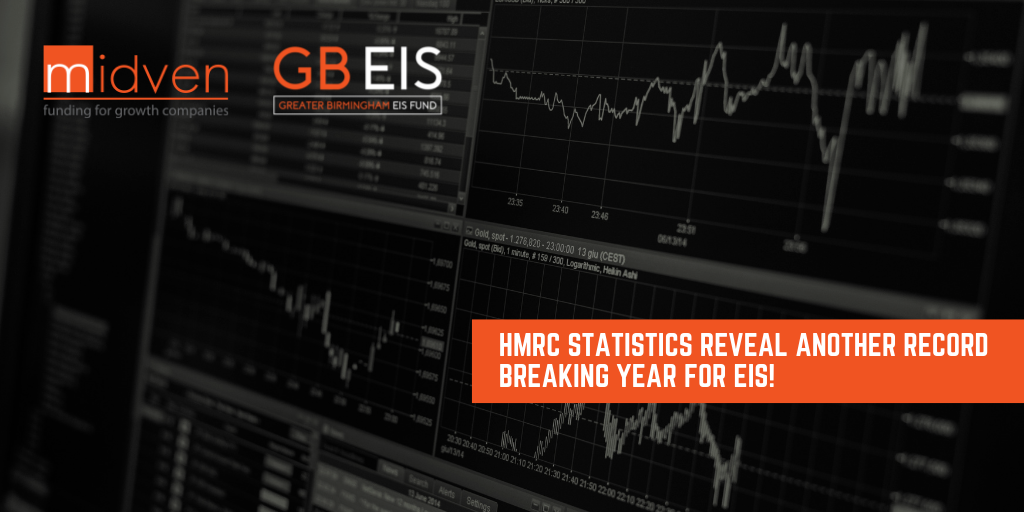 EIS garners record-breaking backing yet again! In our recent blogs, we have been running...